Newsflash from the PTR
The Sinister Squashling pet is BoE 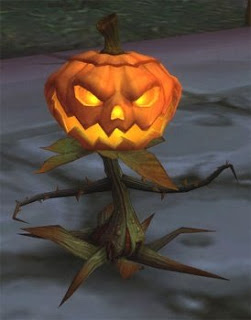 The Sinister Squashling pet is available during the Hallows End world event. It is awarded as either a drop from the Loot-Filled Pumpkin obtained from the holiday boss or available to be purchased from a holiday vendor for 150 tricky treats. This is a BoP (Bind-On-Person) pet in game. Until now...
As of the latest release of the PTR this pet is BoE. As such they can be sold on the Auction House. The going rate for the pet on the PTR AH is about 500 gold each. However the PTR AH tends to be an unreliable source to gauge sales prices in live realms.
You can learn these pets on you alts and then collect 1 extra per toon. My advice is to hold on to these pets to sell after patch 4.3 hits. Assuming that these being BoE on the PTR isn’t a mistake that Blizzard fixes before the patch is finalized.
I have checked other pets and found that they are not unbound. Onyxian Whelpling and Unattached Mr. Chilly are both still BoP. Hopefully this is the first attempt of Blizzards to unbind BoP pets in preparation for the combat pets available in the Mists of Pandaria expansion. I will continue to monitor the PTR and advise you of any changes.
Posted by Jafo at 11:01 AM

Jafo
You can reach me at: JafoCairne@gmail.com